To ensure that her work for conservation and sustainability carries on beyond her lifetime, Jane Goodall, the world-renowned ethologist, has just created a charitable foundation in Geneva. From early thinking to implementation, a journey she chose to undertake with the trusted support of Arnaud Apffel.

“For some time now, I had been thinking of establishing an endowment to support the organizations I have set up and for which I have always fought. Getting to know Arnaud was a catalyst, I chose to launch this project with his help”, recalls Dr. Jane Goodall, British ethologist and UN Messenger of Peace, whose work on chimpanzees redefined the relationship between humans and animals.

READ ALSO: How Dr Jane Goodall became the first and only human accepted into a chimpanzee community, The Telegraph

Once such a decision has been taken, numerous questions arise, for instance on the set-up (choice of the optimal structure: which one, how, with whom, where…). And then there is the implementation part, with all the project management and coordination it requires. Having a trusted advisor is often key.

The story between Jane and Arnaud began in October 2016 at the IUCN World Conservation Congress in Hawaii (the largest environmental symposium in the world). Jane Goodall was there for a lecture, Arnaud Apffel came alongside one of the Foundations he advises. It was during a luncheon organized by this Foundation’s CEO that the first encounter between Jane and Arnaud took place. “Since I was a teenager, I’ve been a big fan of Jane. My mother had “In the Shadow of Man” (1971) as a bedside book! Jane’s determination from an early age, her ability to instill hope, the difference she’s been able to make, her unrelenting dedication to our planet and our children, everything in her life impresses me. But that’s nothing compared to what happens when you get to meet her”, smiles Arnaud. 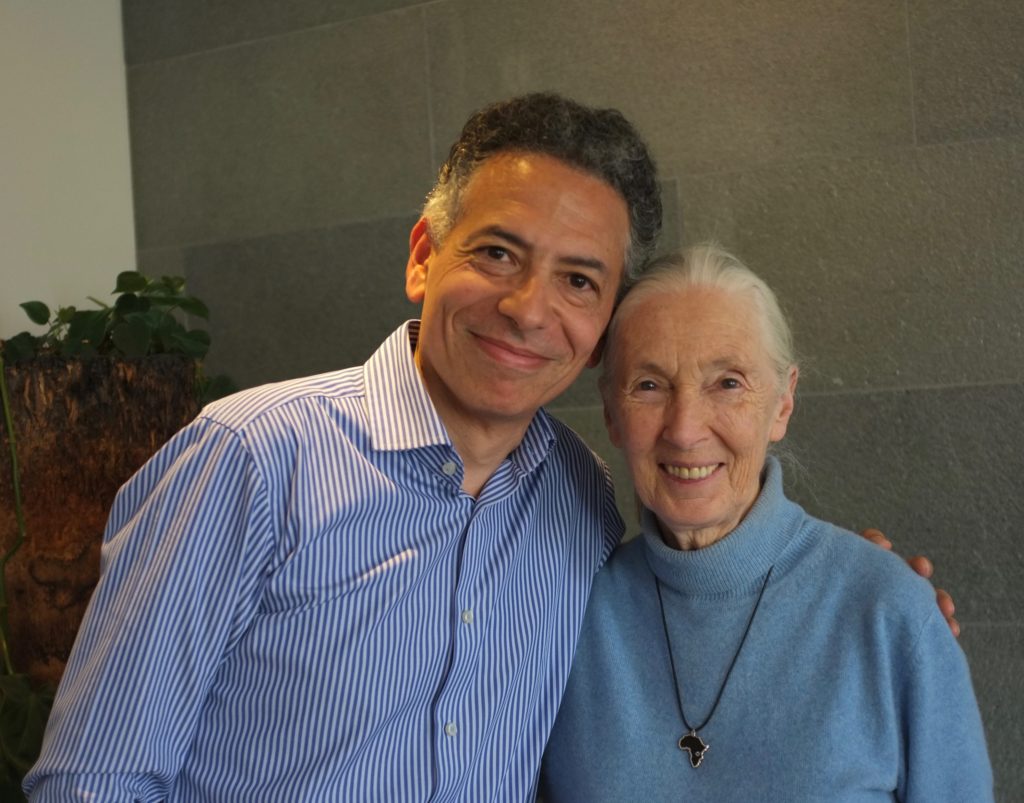 The life of Jane Goodall is nothing ordinary. Born in London, without a scientific degree but passionate about animals and nature, she settled at the age of 26 in the Gombe Stream Game Reserve (now a Tanzania national park) to begin a study of the chimpanzees that lived in the forests along the shores of Lake Tanganyika. Her field research at Gombe transformed our understanding of chimpanzees and redefined the relationship between humans and animals. She not only showed the urgent need to protect chimpanzees from extinction; she has also redefined species conservation to include the needs of local people and the environment. Distinguished on many occasions, UN Messenger of Peace, Jane has created Jane Goodall Institutes (JGI) in 35 countries and Roots & Shoots (youth-led global community action programs) in nearly 100 countries.

SEE ALSO:  Jane Goodall on what separates us from the apes, TED Talk

To contribute to the financial support of her institutes, Jane spends more than 300 days a year traveling and helps her staff raise between 20 and 25 million dollars each year. How to ensure the sustainability of these entities if one day she is no longer able to lead these campaigns? “When we discussed these questions at our lunch, Arnaud immediately offered his help, to be my guide on this path. I read eyes. I knew immediately that I could rely on him.”, says the ethologist. “And the more time passes, the more I welcome this wise decision!”.

The first step of the Foundation project was to clarify the objectives. In addition to the support of the current organizations, other goals were added, such as cross-border projects, emergency actions (which require non-earmarked and readily available capital), or the facilitation of the creation of new institutes.

Financial aspects (calibration of the capital according to the needs), legal matters (elaboration of the statutes), technical choices (where to base the Foundation), governance (composition of the initial Board of Trustees), choices of a lawyer, a notary, a banker (non-exhaustive list!): “My role was that of an architect, as I’m used to doing with Perennium. At each step, I explain what is at stake, I propose options, I make recommendations. I also involved my own network, to find both the most competent players in each field but also those who share our values. The women and men who helped set up Jane’s foundation know and admire her work.” explains Arnaud. And he adds: “It’s very rare to have persons like Jane who have a ‘real’ heritage to pass on. Jane is a bearer of hope. This flame should never go out”.

Registered in Geneva in June 2017, the “Jane Goodall Legacy Foundation” is recognized as a public utility and as such exempt from taxes. Its bank accounts are ready to receive the first donations. But for Arnaud, the work isn’t over. “Jane asked me join the Board,” he admits. “As such I am involved in fundraising, and we have very ambitious objectives: USD 200 million over 5 years. And of course, when a major potential donor enquires about the way his gift would be invested, I am on the front line to explain our Investment Policy, including the responsible and sustainable aspects”. The fundraising begins well, with a first significant donation from a Taiwan-based foundation, further evidence of the international recognition of Jane Goodall’s work. And the release (first in North America in the fall of 2017 and then in the rest of the world this year) of Brett Morgen’s documentary on her life, simply titled “Jane”, comes at a perfect time for the foundation.